God-Inspired Music from the New Heart HE Has Made!

On this page are listed upcoming events that you may be interested in attending. This page will be updated as new events are noted or have already happened. Most events have no admission charge, (i.e., they are FREE and open to the public). Events that include an admission charge, usually quite minimal, a suggested donation, or are restricted in any way as to who may attend will be so noted in each announcement.

Any questions about any posted event can be directed to New Heart Music using the Contact Us page and completing and sending the inquiry card or by simply contacting Scott Werdebaugh directly by telephone at (503) 838-6868O LONGER HOLDING REGULAR PROGRAMS., IS N(503) 838-6868 or by email at any one of the following email addresses:

NOTE: THE AMERICAN GUILD OF ORGANISTS (AGO), SALEM, OR CHAPTER IS NO LONGER HOSTING REGULAR PROGRAMS. THUS, I WILL NO LONGER BE ADDING NOTICES ON THIS PAGE. YOU ARE STILL WELCOME TO CONTACT ME FOR ANY EVENTS, IF ANY, THAT I MAY KNOW OF. OTHERWISE, PLEASE CONSIDER THIS PAGE AS INACTIVE FOR THE FORSEEABLE FUTURE. THANK YOU!

Featuring young organ students from the area, up to age 25.

Admission:  FREE and Open to the Public

Featuring the members of the Salem Chapter of the American Guild of Organists playing a wide variety of organ compositions by J. S. Bach and his relatives in celebration of his Birthday!

Admission:  FREE and Open to the Public

Featuring:  Organists of the Salem AGO Chapter

Salem AGO will host a reception following the concert.

Donations Accepted and Welcomed to support

There will be an AGO Members Recital for Portland Chapter on May 18 (this coming Sunday) at 4 p.m.  The venue will be the Agnes Flanagan Chapel at Lewis & Clark College.  There has been a good response from members who want to play and we should have an excellent concert.

Those playing are:  Jeff Wood, Joe O'Donnell, Rod MacPherson, Grant Edwards, Chris Schindler, and Howard Ashley  Hope to see you all there.

Sunday,May 18, 4 p.m. Organ concert - Paul Lim,winner of the AGO competition for Young Organists Regional CompetitionDonations will go towards his expenses to travel to the Boston nationalconvention where he will play an exhibition concert. First Baptist Church, 125NW 10th St., Corvallis.

Please join me in celebrating my career as a musician thus far! My senior recital will be a showcase of the years of study and practice I have put into piano and pipe organ performance. It will also be a celebration of my high school graduation, and the start of the next chapter of my life.

The recital will be on Saturday, June 14, at 2:00pm at First Presbyterian Church in downtown Salem. I will be performing works by J.S. Bach, Maurice Duruflé, Sergei Rachmaninoff, and others. The recital should last about an hour, and a reception will follow in the Fellowship Hall. The entrance will be at the back of the church, where the parking lot is located.

I am so excited to share my love of music with you, and it would mean so much to me if you could come!

Ahighlight of the conference is a hymn festival featuring well-known Portlandorganist and AGO member, Walter Krueger and featuring a festival choir andfestival brass. The festival will be held on Tuesday, June 17 at 7:30 p.m. atSt. Michael’s Lutheran Church, 6700 NE 29th Avenue and is free andopen to the public. A new hymn with text by local poet, Kristine Kuhn and newtune and setting by nationally known composer, Scott Hyslop, will be premieredat the festival.

Inaddition to the above events there will be fourteen interest sessions includingreading sessions of new organ music, choral music and contemporary music, ahandbell clinic and a session on choral techniques plus many more. For moreinformation contact Bill Kuhn – conference chair at wkuhn@cu-portland.edu or 503.493.6285503.493.6285.There is still time to register through the ALCM website: http://www.alcm.org/about/regions/region-4/.Single day registrations are also available on site. 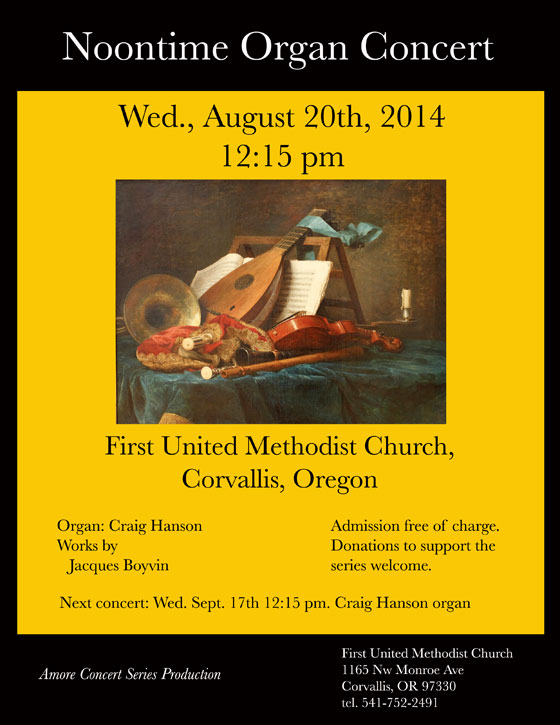